The Municipality of the District of Saanich

The area that is known today as the District of Saanich has been home to the Lək̓ʷəŋən (Songhees and Esquimalt Nations) and W̱SÁNEĆ Peoples (W̱JOȽEȽP, BOḰEĆEN, SȾÁUTW̱, W̱SIḴEM, and MÁLEXEȽ Nations) since time immemorial and their history in this area is long and rich.  It is here that both the Lək̓ʷəŋən and W̱SÁNEĆ peoples lived and worked by fishing, hunting and gathering for thousands of years prior to European arrival.

The Municipality of the District of Saanich was first incorporated in 1906.  The area is located at the southern tip of Vancouver Island on the West Coast of British Columbia, Canada. With an area of 112 square kilometers, Saanich is the largest municipality on Vancouver Island and it is part of the Capital Regional District (CRD). As part of the CRD, Saanich shares its borders with Central Saanich, Highlands, View Royal, Esquimalt, Victoria and Oak Bay.  The population of Saanich is approximately 114,000[1] and the area is comprised of a number of thriving business districts, a large residential area, and it still maintains an important agricultural land base.  In addition to serving nearly 20,000 elementary and secondary students, Saanich is home to two post-secondary institutions including the University of Victoria and Camosun College that host approximately 32,400 students between the two institutions[2].

[2] The District of Saanich, Population Projections, Trend and Capacity Build Out Analysis 2013 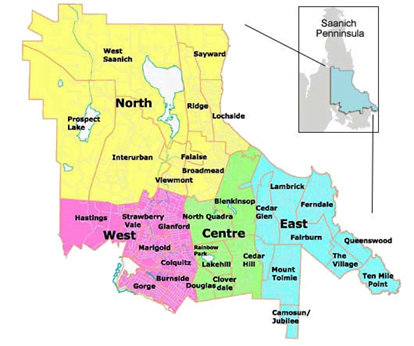